In the past year, there’s been a lot of hype around biomanufacturing — from growing cell-based meat to microbe-powered medicine manufacturing. But none of synthetic biology’s darlings can exist without one key piece of equipment: a bioreactor. While the world debates how best to bring biology-fueled manufacturing into existence, one company is already rethinking its most important instrument.

Stämm Biotech, founded in 2014, is developing a desktop-sized bioreactor that looks pretty different from the tanks, tubes and knobs traditionally seen in industrial or even benchtop bioreactors. The Buenos Aires-based company just announced a $17 million Series A round; combined with previous seed and pre-seed rounds, that brings its total raised to $20 million.

To get what Stämm is doing, you have to know what a bioreactor usually looks like, and what’s going on inside it. At a basic level, industrial-scale bioreactors are giant, sterilized tanks. Those tanks are filled with the medium needed to grow a certain type of cell or microorganism, which may either produce the desired product or be the product itself.

These cell cultures are stirred using a motorized instrument, kept at the correct temperature using coolants, and supplied with the right amount of oxygen (or lack thereof) to support their growth. You can also do this process in a single-use bag, rather than a tank, which cuts down on the time needed to re-sterilize a tank before you can grow something else.

What Stämm has done is essentially cut the tank, stirring and tubes out of the equation entirely. Instead, it’s developing a unit that 3D prints a dense network of microchannels that pass cells through the nutrients and oxygen they need. The movement itself acts as the stirring motion. 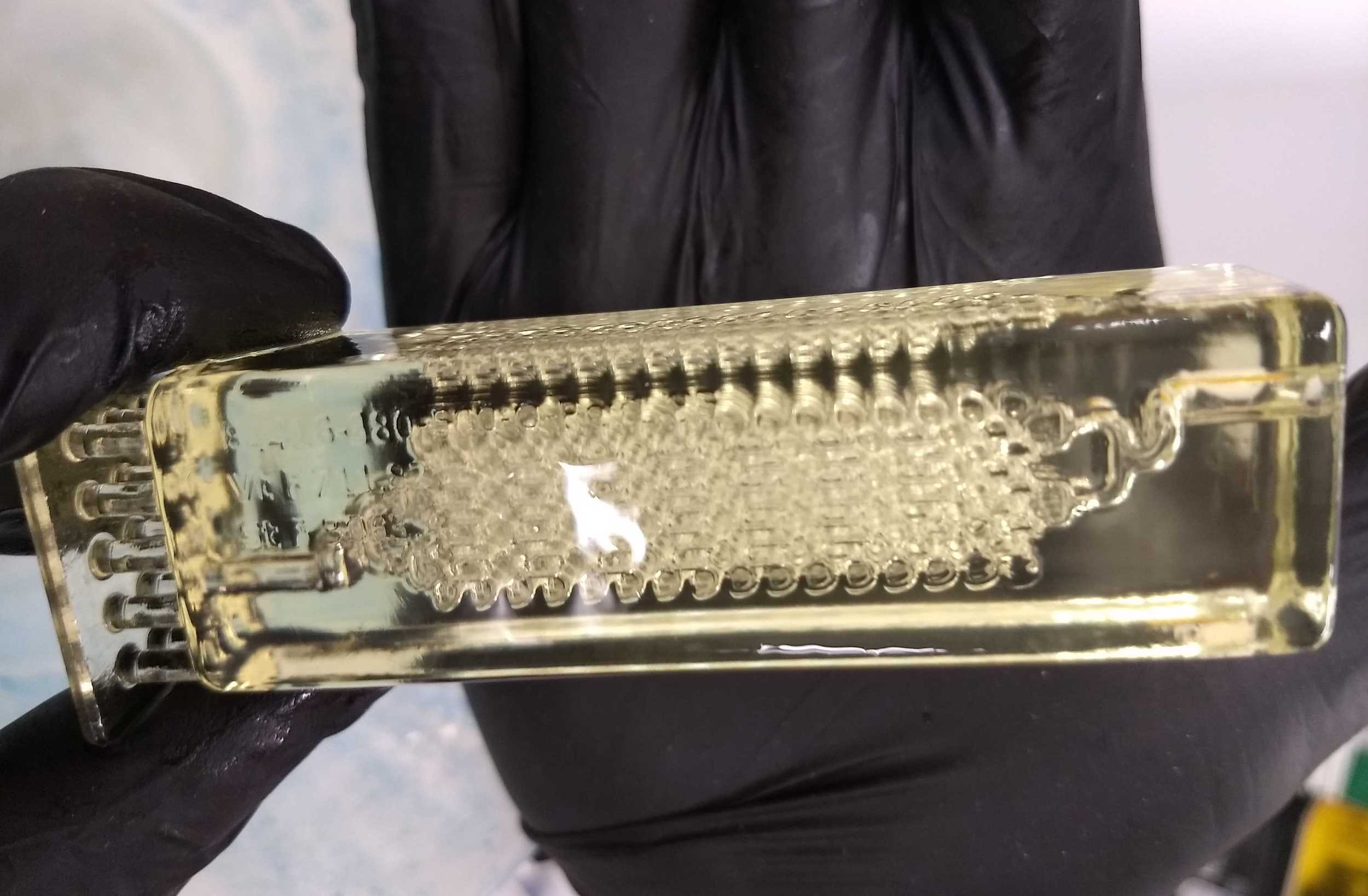 An example of a 3D-printed fluid channel piece. Cells, oxygen and nutrients can be added at a variety of places. Image Credits: Stämm Biotech

Those channels are designed using Stämm’s software component. You can think of the whole process as a “CDMO [contract development and manufacturing organization] on the cloud,” as Yuyo Llamazares, the co-founder and CEO of Stamm, told TechCrunch.

“We detected this breach between the will to develop a biological product and the abilities of tools that were out in the market. That inspired us to take ownership of this problem,” he said.

There’s already been significant interest in the biomanufacturing space based on the idea that growing stuff in cells is the next wave of manufacturing, from biopharmaceuticals to chemicals, textiles, fragrances and even full cuts of meat.

For instance, Ginkgo Bioworks, which reached IPO with a $15 billion valuation, is one company especially bullish on both pharma and non-pharma applications of biomanufacturing. But the evidence of such world-changing manufacturing has leaked in slowly. (And, as of writing, Ginkgo’s market cap was closer to $7.24 billion.)

None of the promise of biomanufacturing can actually happen without the bioreactors. Stämm’s approach is to scale down the size of the reactor through the use of microfluidics.

CG representation of the fluid flow through one of the printed pieces. Image Credits: Stämm Biotech

At the moment, the company claims to be able to reduce the size of a biomanufacturing facility by two orders of magnitude. But it is still operating on a smaller scale than most large bioreactors. Stämm’s bioreactors can reach an output of about 30 liters, not the thousands often seen at industrial scale. (That said, the company does claim that its core concept can scale to about to about 5,000 liters.)

Despite the potential of the technology, Stämm is still in the early stages of commercializing it. It currently is working with one European biopharma company focusing on producing biosimilars, and says it has five potential new partners in the pipeline. The company plans to move to “pilot scale” in 2022.

At this moment new partnerships are Stämm’s major metric of success, said Llamazares. “We want to interact firsthand with as many partners as possible, understand how the product that we have developed can further help,” he said.

If you dive a bit deeper into the business side of things, Stämm is still working out some kinks. When I asked Llamazares the cost of one of the units, he didn’t give a dollar figure. Stämm is looking to get clients used to working with microfluidic bioreactors, as opposed to the traditional machines, he said. In the meantime, the price of the machines and services isn’t fixed.

“We are exploring at this stage, understanding diverse business models and interaction with clients,” he said.

As for this round, Stämm plans to double its headcount to around 200, and expand its international presence. The company will also further refine and develop its microfluidic bioreactors and the tools needed to control them.