The power grid supply in Africa is erratic and inconsistent, affecting rural and urban households and businesses. For restaurants or neighborhood stores dealing with perishables, frozen foods and beverages, having intermittent electricity inhibits the growth of their businesses. Some of them turn to diesel-fueled generators, which are expensive and toxic, to provide electricity.

Companies such as Koolboks are providing an alternative by creating a solution that can generate refrigeration without power. The sustainable cooling company, which offers accessible cold storage solutions to businesses across Africa, has raised $2.5 million in seed funding.

Nigeria-based growth equity fund Aruwa Capital Management led the round with participation from Acumen, Blue Earth Capital, All On, GSMA and other investors. Koolboks has raised $3.5 million since Ayoola Dominic and Deborah Gael founded the company in 2018.

At the time, Koolboks’ initial product was essentially an outdoor camping refrigerator that targeted European campers. But in 2020, the France-based and Africa-focused startup pivoted to a new market: business owners in off-grid locations in Africa and emerging markets, starting with Nigeria.

“Koolboks wanted to change the way the world experiences cooling. We had initially started with the camping world in Europe. Despite some success, it didn’t take us too long to figure out that our technology could be more impactful with the people that need it the most,” said Dominic, the startup’s co-founder and CEO, on a call with TechCrunch. “These people find it difficult to feed their families because 40% of their food gets spoilt even before getting to the market. Some labor day and night to put their savings together to buy food stocks only for them to throw it away the next day due to lack of refrigeration.”

According to Dominic, Koolboks’ refrigerators are tapping into Africa’s abundant supply of the sun with water that can generate refrigeration for up to four days in the absence of power. A typical Koolboks unit works as a refrigerator, freezer, or lighting, as it comes with two LED light bulbs and USB ports for charging mobile phones.

The Paris- and Lagos-based company employs a pay-as-you-go model that enables these individuals and small businesses, such as fish dealers, to pay $10 to $20 monthly to own one of its 110–1,000 liter-sized off-grid solar refrigerators. They make payments through their mobile phones or a POS agent close to their shops; they get tokens entered as codes into the fridge, proceeding to use it for a certain period.

“In Koolboks, we figured out a way to store energy in an extremely cheap form. Then the exciting fact is we integrated into this solution, a pay-as-you-go technology, which enables individuals to pay in small monthly, weekly or daily installments for their refrigerators.” 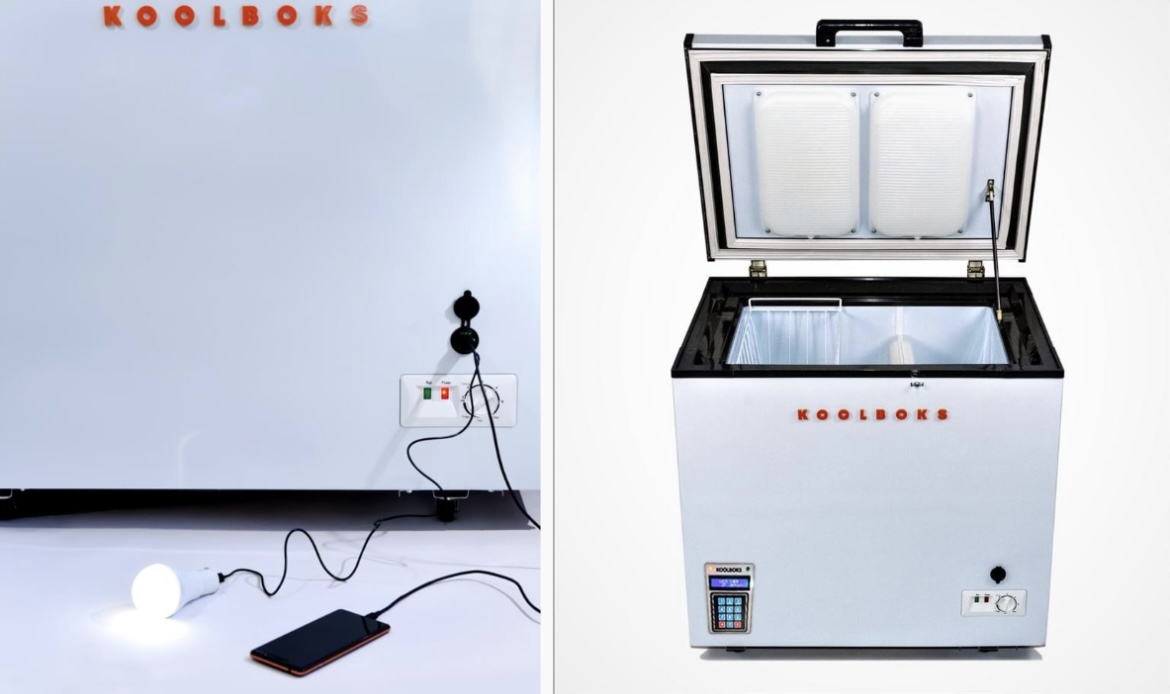 The four-year-old company currently sells across 18 countries, said the chief executive. These are markets where it has distributors or dealers; 13 of them are in sub-Saharan Africa: Benin, Burkina Faso, Democratic Republic of the Congo (DRC), Ghana, Ivory Coast, Kenya, Liberia, Nigeria, Madagascar, Mozambique, Rwanda, Senegal and Sierra Leone. However, the company has a physical presence in just Nigeria and Kenya; the latter was opened as an affiliate office last month. Koolboks is also eyeing DRC and Ivory Coast as its next offices, Dominic said.

Koolboks will deploy the capital to expand across Nigeria, including building the team to support its growing B2C business and constructing a local assembly facility. It will also help to catalyze expansion into new markets and scale the business, which has acquired over 3,000 unique customers across all markets. Dominic claims that the entire transaction Koolboks recorded in 2021 was achieved in the first two months of this year.

“We have been impressed with Koolboks’s innovative solution, which goes far beyond food waste reduction — the team’s laser focus on ensuring clean, renewable energy in off-grid areas is crucial to the survival of many small businesses and sectors as well as fostering economic gender equality,” said Adesuwa Okunbo Rhodes, the founder at female-led growth equity fund Aruwa Capital Management. “Equitable access to clean and reliable energy is key to closing the gender economic gap across rural areas, and we are excited to see Koolboks’ expansion continue to make economic equity a reality for millions more women across Africa.”