It is TechCrunch tradition to look at Apple’s stock price during, and after its major events. Why? Because we enjoy it, and we’re always curious what impact the company’s news has on its actual financial worth. The answer is usually very, very little.

This may surprise you. After all, Apple details its new hardware and software at its confabs, which means that the goods it intends to sell in the coming quarters are being shown off before investor eyes for the first time. Sure, Apple leaks more than it used to, but that doesn’t mean that everything comes out early — its events are still events.

Why don’t investors seem to care about products? It’s a little fuzzy, but data indicates that Apple could launch anything short of a car and still get blanked by the capital classes.

Anyway, here’s a chart of Apple’s share price, along with price data from a Very Special Guest: 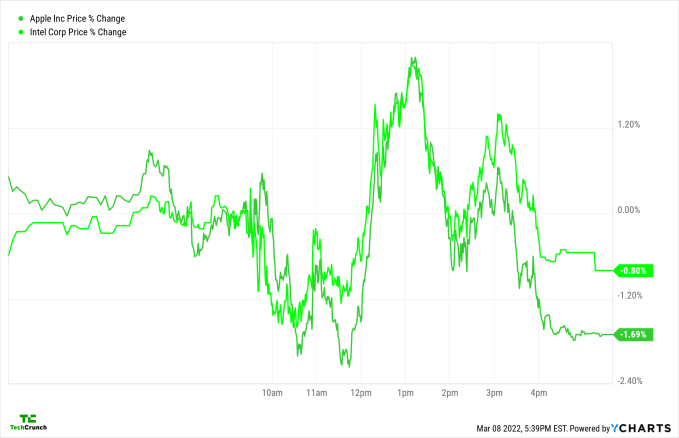 It was a wild day in the markets. Stocks were down! Then they went up! And then they went down! If you watched the ticker-symbol world today, it’s fine to reach for your favorite psychoactive at this point and chill. You deserve it.

You can see those same  ups and downs in the above chart, which pits Apple and Intel against one another on a one-day timeframe. Why the two companies? Because Apple released a lot of notes on its chip work, the very industry that Intel once ruled from what felt like an impenetrable market position. In spite of that, Apple made many a headline today thanks to even more new chips, and the fact that it is building new computers to house them.

So, up goes Apple and down goes Intel? Right? There was some hubbub that Intel’s shares fell when Apple announced its M1 Ultra chip, so I charted the two at the same time, and asked myself to find the dip afterwards, without checking timings from my notes. Good luck, yeah?

By the end of regular trading, Intel actually came out ahead. After Apple announced neat new silicon.

Is the stock market a meaningless random-number generator? No, not completely. But the above data does help us better understand what the stock market actually is, at least for the largest companies. Namely it’s a macro-sentiment engine powered by a million vampire computers, not moved about not by pedestrian things like new phones, but instead by alchemical analyst expectations, and newly-announced share buybacks — paid for with debt, natch.

We’ll be back for Apple next event with another episode of “does anything matter.”